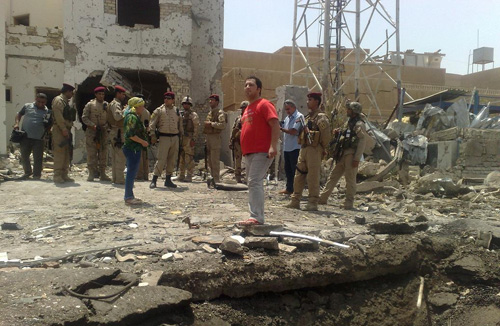 A suicide bomber driving a mini bus packed with explosives struck the office of the channel in al-Harthiya neighborhood, killing at least four people and wounded many more.

General Qassim Atta, the spokesman of Baghdad's Command Center said to JFO" around 200 kilograms of explosives has been used in the bombing", he also confirmed" three guards and a cleaner were killed in the attack".

A high ranked security officer who preferred to remain anonymous said that he believed the mini bus had been packed with explosives in the nearby areas.

JFO visited the scene of the attack where the bombing had created a crater, and observed several neighboring houses had been damaged and more than 10 cars were totally burned.

“We send our condolences to the families and friends of the victims and wish a fast recovery for those who were injured; Mariwan Hama-Saeed, vice chairman of JFO, said. “We strongly condemn this terrorist act which shows that journalists working in Iraq still face substantial risks.”

“We call on the authorities to launch a comprehensive investigation into this terrorist act and bring those responsible to justice” Hama-Saeed said.

Al-Arabiya office and correspondents have been targeted in the past, In October 2004, a suicide bomber targeted the office of the channel killing four employees, and also in March 2004 in Bagdad, Correspondent Ali al-Khatib and cameraman Ali Abdul-Aziz were killed by the American troops' fire.

In 2008, Jawad Hattab, Baghdad bureau chief of al-Arabiya office, survived an assassination attempt by a sticky bomb was exploded beneath his car.